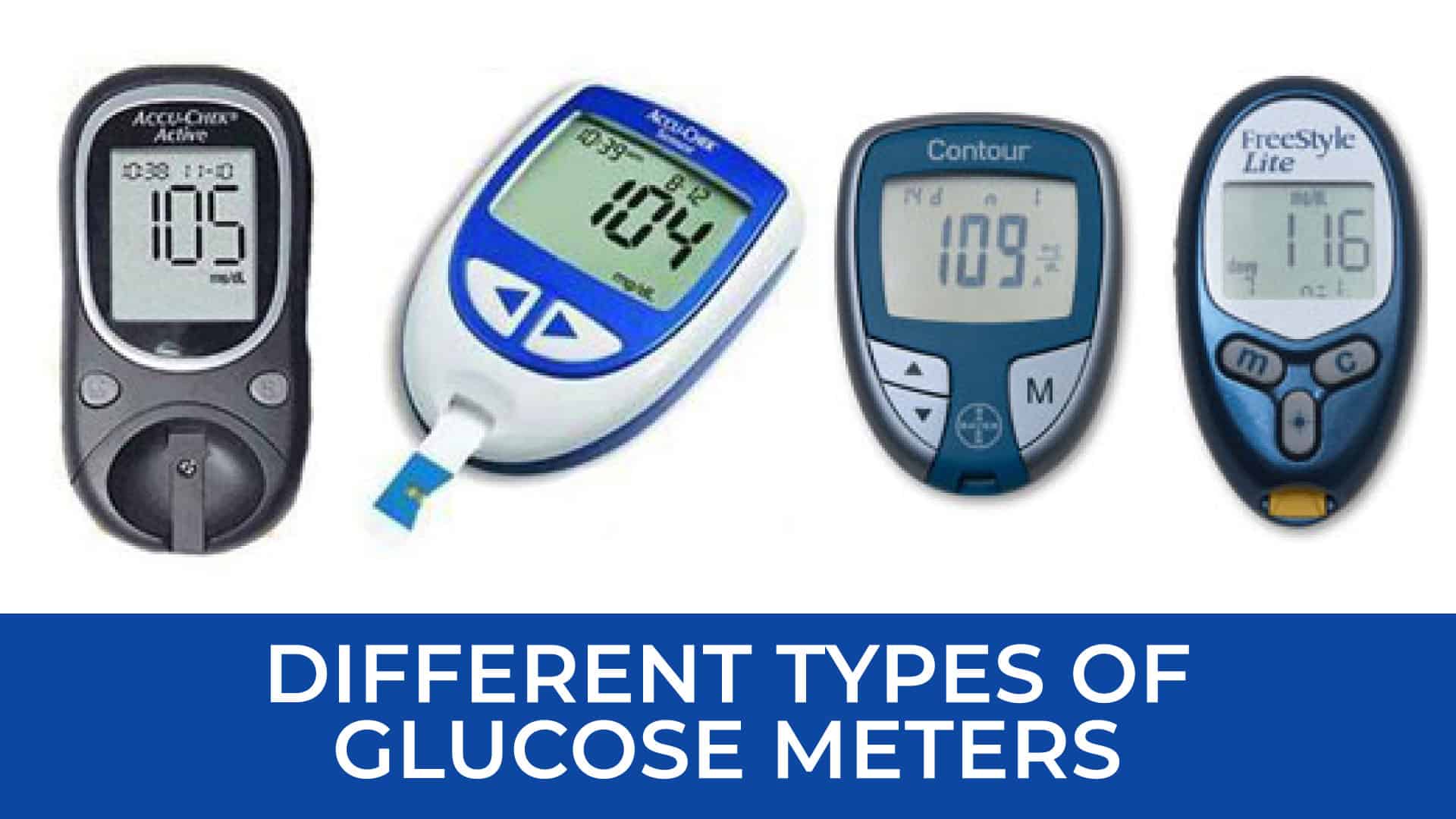 Glucose meter, The simple, easy and portable equipment that helps those who want to monitor their blood glucose level in the best way. It offers an amazing large numeric display, buttons and a meter that makes it easy to read and hold. It gives frequent and accurate results with only a few tiny sample drops of blood. There are different types of glucose meters based on the usage of the patient.

A glucose meter is a medical device for determining the approximate concentration of glucose in the blood. It can also be a strip of glucose paper dipped into a substance and measured to the glucose chart. It is a key element of home blood glucose monitoring by people with diabetes mellitus or hypoglycemia.

People with diabetes often use a blood glucose meter to help them manage their condition.

The average size of Glucose Meters is now approximately the size of the palm of the hand, although hospital meters can be the size of remote control. They are powered by the battery and hence called the battery-powered.

Test Strip is a consumable element that contains chemicals that react with glucose in the drop of blood is used for each measurement. For some models, it is a plastic test strip with a small spot impregnated with glucose oxidase and other components. Each strip can be used only once and then discarded. Instead of strips, some models use discs, drums, or cartridges that contain the consumable material for multiple tests.

Since test strips may be different from batch to batch, some models require the user to manually enter a code found on the vial of test strips or on a chip that comes with the test strip. By entering the coding or chip into the glucose meter, the meter will be calibrated to that batch of test strips. However, if this process is carried out incorrectly, the meter reading can be up to 4 mmol/L (72 mg/dL) inaccurate.

The implications of an incorrectly coded meter can be serious for patients actively managing their diabetes. This may place patients at an increased risk of hypoglycemia. Alternatively, some test strips contain the code information in the strip; others have a microchip in the vial of strips that can be inserted into the meter. These last two methods reduce the possibility of user error. One-Touch has standardized their test strips around a single code number, so that, once set, there is no need to further change the code in their older meters, and in some of their newer meters, there is no way to change the code.

The volume of blood sample:

Smaller drop volumes have enabled “alternate site testing” – pricking the forearms or other less sensitive areas instead of the fingertips. This type of testing should only be used when blood glucose levels are stable, such as when before meals, when fasting, or just before going to sleep.

The times it takes to read a test strip may range from 3 to 60 seconds for different models.

The glucose value in mg/dl or mmol/l is displayed on a digital display. The preferred measurement unit varies by country: mg/dl are preferred in the US, France, Japan, Israel, and India. mmol/l is used in Canada, Australia, and China.

Germany is the only country where medical professionals routinely operate in both units of measure. (To convert mmol/l to mg/dl, multiply by 18. To convert mg/dl to mmol/l, divide by 18.) Many meters can display either unit of measure; there have been a couple of published instances in which someone with diabetes has been misled into the wrong action by assuming that reading in mmol/l was really a very low reading in mg/dl or the converse. In general, if a value is presented with a decimal point, it is in mmol/l, without a decimal it is most likely mg/dl

Glucose levels in plasma (one of the components of blood) are higher than glucose measurements in whole blood; the difference is about 11% when the hematocrit is normal. This is important because home blood glucose meters measure the glucose in whole blood while most lab tests measure the glucose in plasma. Currently, there are many meters on the market that give results as “plasma equivalent,” even though they are measuring whole blood glucose. The plasma equivalent is calculated from the whole blood glucose reading using an equation built into the glucose meter. This allows patients to easily compare their glucose measurements in a lab test and at home. It is important for patients and their health care providers to know whether the meter gives its results as “whole blood equivalent” or “plasma equivalent.” One model measures beta-hydroxybutyrate in the blood to detect ketosis for measuring both unhealthy ketoacidosis and healthy nutritional ketosis.

Most meters now include a clock that is set by the user for date and time and a memory for past test results. The memory is an important aspect of diabetes care, as it enables the person with diabetes to keep a record of management and look for trends and patterns in blood glucose levels over days and weeks. Most memory chips can display an average of recent glucose readings. A known deficiency of all current meters is that the clock is often not set to the correct time (i.e., due to time changes, static electricity, etc.) and therefore has the potential to misrepresent the time of the past test results making pattern management difficult.

Many meters now have more sophisticated data handling capabilities. Many can be downloaded by a cable or infrared to a computer that has diabetes management software to display the test results. Some meters allow entry of additional data throughout the day, such as insulin dose, amounts of carbohydrates eaten, or exercise. A number of meters have been combined with other devices, such as insulin injection devices, PDAs, cellular transmitters, and Game Boys. A radio link to an insulin pump allows automatic transfer of glucose readings to a calculator that assists the wearer in deciding on an appropriate insulin dose.

One of the best types of Special glucose meters for multi-patient hospital use now come in trend and use. Hospital Glucose Meter provides more elaborate quality control records, The data handling capabilities of these Glucose Meter are designed to transfer glucose results into electronic medical records and the laboratory computer systems for billing purposes. 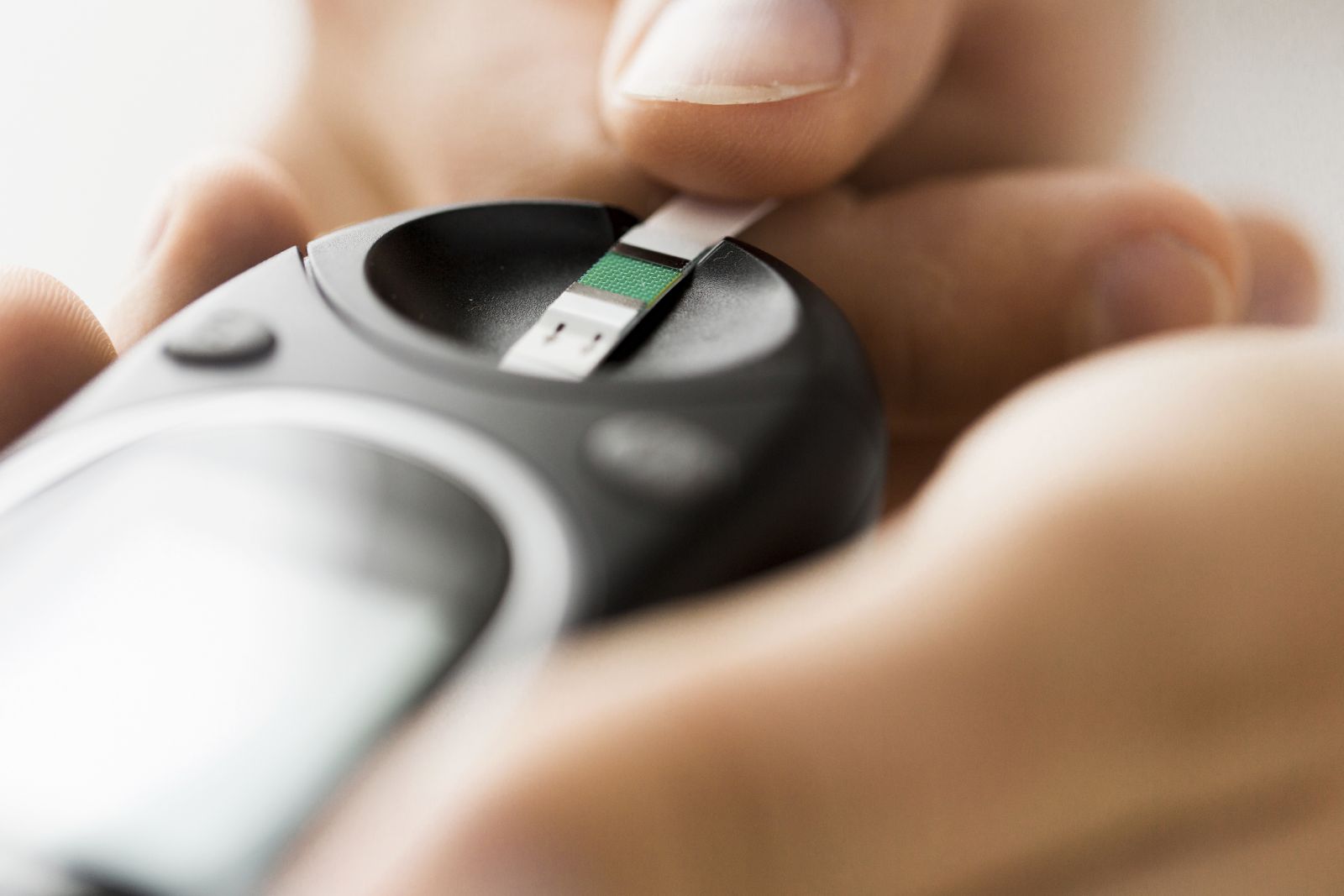 Point-of-care (POC) tests provide analytical information that can be used to make decisions at patients’ bedsides, as opposed to laboratory tests that must be run at a central laboratory. POC testing is a widely used tool to enable immediate determination of glucose levels in hospitalized patients and facilitate rapid treatment decisions in response to fluctuations in glycemia. Accurate POC glucose testing requires attention to various factors before, during, and after the performance of tests.

3) Proper documentation of the fidelity of meter results with the medical record to avoid post-analytical errors.

Three types of initiatives are underway to improve the accuracy of point-of-care (POC) blood glucose monitoring in hospitals, including efforts to

2) eliminate sources of error, and

3) improve the safety of testing. Improved accuracy of blood glucose monitors has been shown to lead to a higher quality of insulin dosing decisions.

These small disposable strips of plastic may look insignificant but they provide a very important role in helping people with diabetes to monitor and control their diabetes.

In the vast majority of cases, each meter will take one type of test strip only. There are some blood glucose meters however that take blood ketone strips as well, to test for ketone levels.

HOW DO TEST STRIPS WORK?

The level of gluconic acid is responsible for the current produced between the terminals. The blood glucose meter then uses an algorithm to work out the blood glucose level based upon the difference in current.

Some blood glucose test strips allow the reapplication of more blood to the same test strip if needed during the test.

When blood is placed on the active part of the strip and then wiped off after a specified number of seconds, the reagent will change color and the result can be obtained by matching the color against a color chart on the side of the pot. 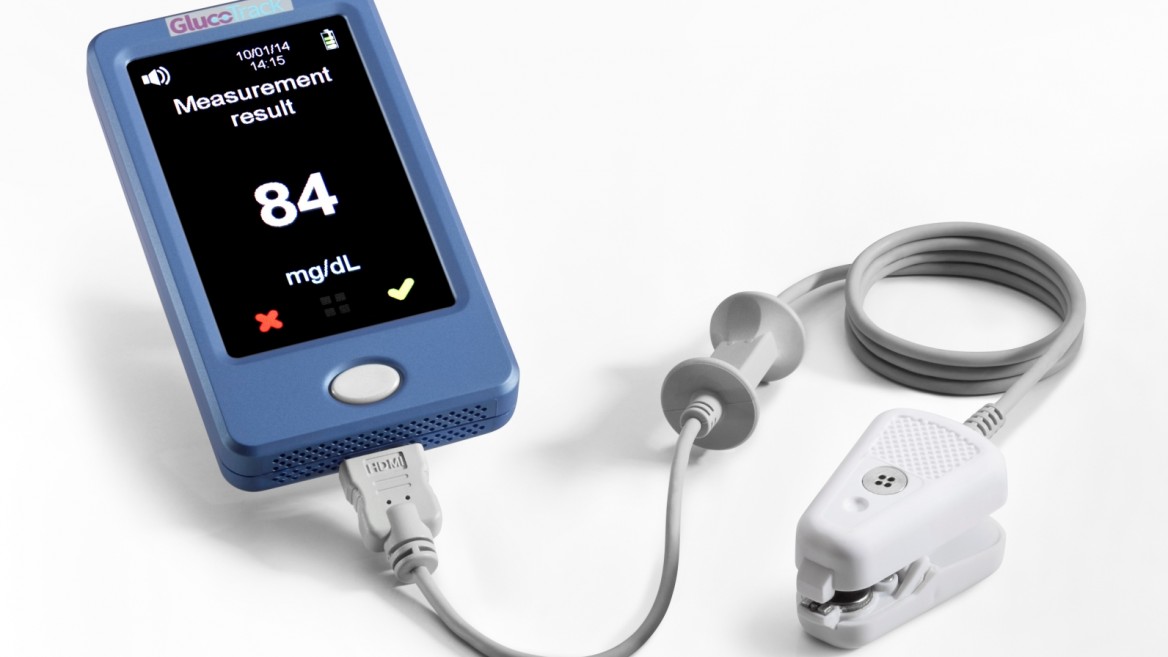 Non-invasive glucose monitoring refers to the measurement of blood glucose levels (required by people with diabetes to prevent both chronic and acute complications from the disease) without drawing blood, puncturing the skin, or causing pain or trauma. The search for a successful technique began about 1975 and has continued to the present without a clinically or commercially viable product. As of 1999, only one such product had been approved for sale by the FDA, based on a technique for electrically pulling glucose through intact skin, and it was withdrawn after a short time owing to poor performance and occasional damage to the skin of users. 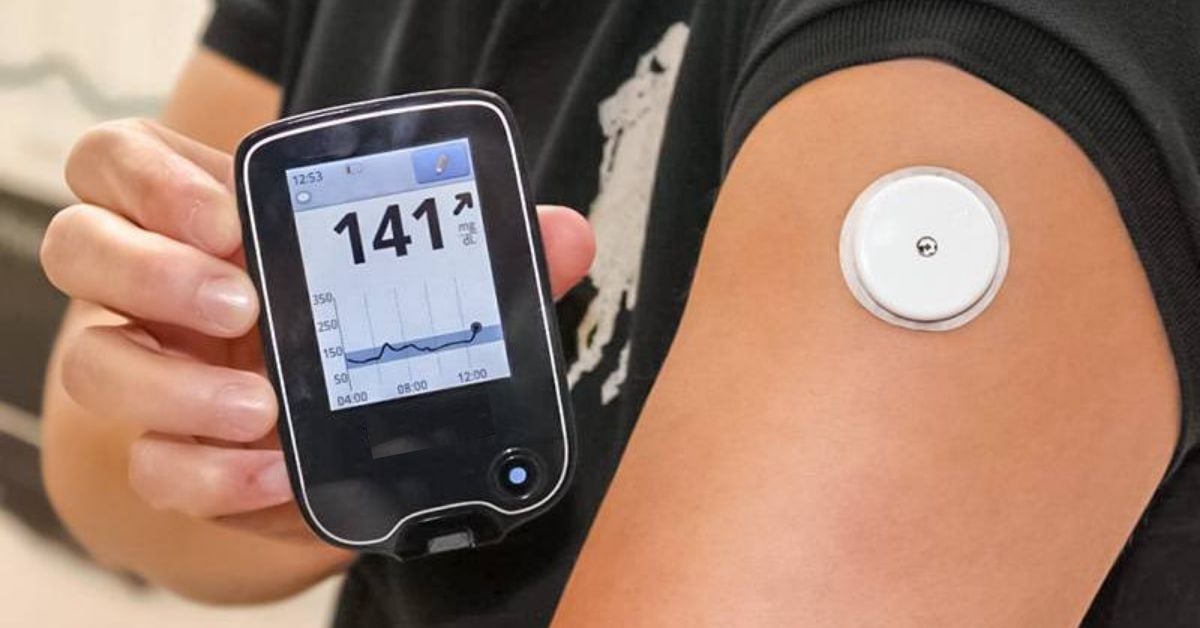 A continuous glucose monitor (CGM) is a device used for monitoring blood glucose on a continual basis by people with either type I or type II diabetes. It takes a reading on set intervals with a small electrode placed under the skin and held in place by an adhesive. A transmitter attached to the electrode sends data to a separate receiver.

Fingerprick testing of blood glucose levels measures the level at a single point in time. CGM use allows trends in blood glucose to be displayed over time. Users must calibrate CGM devices with traditional blood glucose measurements.

A limitation of the CGM system is that glucose levels are taken from the interstitial fluid rather than the blood. As it takes time for glucose to travel from the bloodstream into the interstitial fluid, there is an inherent lag behind the current blood glucose level and the level measured by the CGM. This lag time varies based on the person and the device and is generally 5–20 minutes.

Perform your blood test within a few steps.

Some wish to reset the readings of the glucose meter after several counts, There is no way to clear the old memory of the glucose meter or to delete test results stored in the memory of the meter, as these results are important to health care providers in evaluation. Once the meter has reached its capacity of 400 readings, the oldest test results will eventually “roll out” of the memory, in the order that they were obtained.